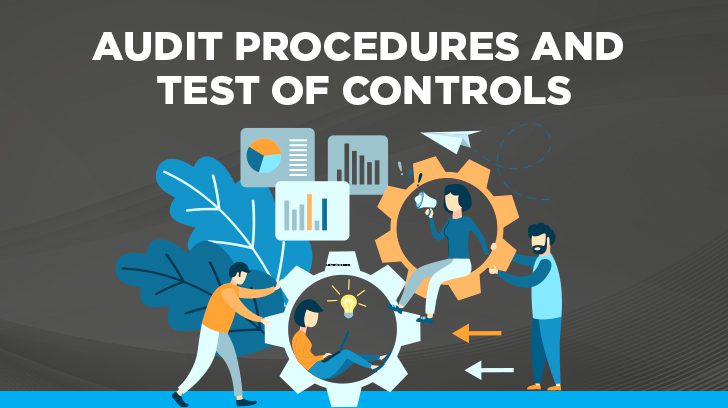 Type 2 SOC engagements (for both SOC 1 audits and SOC 2 audits) require walkthroughs and testing of the controls in place at the service organization to be able to opine on the suitability of the design and the operating effectiveness of controls during the period under review. Each control objective or criteria has a number of supporting controls that are walked through and tested, and this is accomplished using a variety of testing methods/procedures.

What is a Test of Control?

When performing a SOC examination, we are helping our clients identify the controls that they have, or need to implement. These controls will demonstrate to their clients that the services they are providing or their environment is safe and secure. So once the controls are identified how do you confirm they are working? That is where a test of control comes in. There are a number of different ways to confirm, or test, that a control is working. Below we have outlined the five testing methods used for testing controls as part of a SOC examination.

What are the Five Types of Audit Tests?

There are five main methods to walk through and test each control in place at the service organization. These methods include (listed in order of complexity from lowest to highest): inquiry, observation, examination or inspection of evidence, re-performance, and computer assisted audit technique (CAAT). 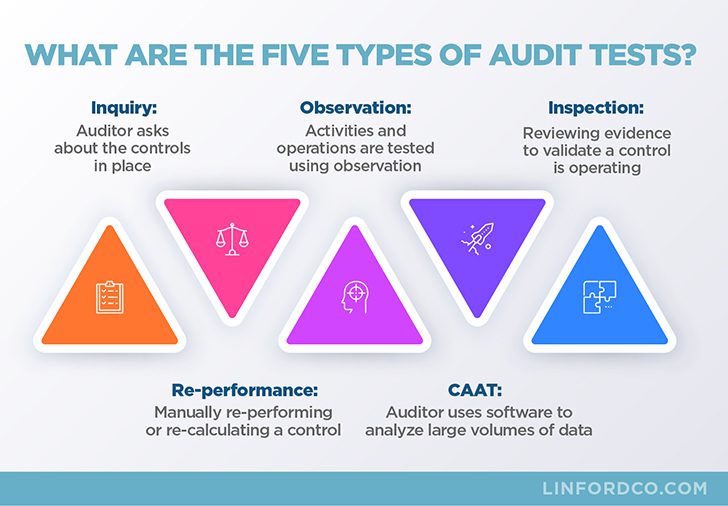 When Do You Use the Different Audit Testing Procedures?

If during testing the auditor encounters an error in a test of controls, they will expand the sample size and conduct further testing, or perform additional tests. Additional types of testing procedures may be required or useful. If additional errors are found, the auditor will consider whether there is a systematic controls problem that renders the controls ineffective, or if the errors appear to be isolated instances that do not reflect upon the overall effectiveness of the control in question.

What are the Main Procedures for Obtaining Audit Evidence?

When completing the tests of controls, it is very important how audit evidence is obtained. To be able to rely on evidence obtained, the auditor must be comfortable that audit evidence is complete and accurate. This can be accomplished by observing the pulling of audit support directly from the person responsible for the support. For example, sitting with a system administrator as they pull up and screenshot password restrictions or a population of all system users. Additionally, to confirm completeness of population, queries can be obtained and reviewed to ensure none of the population has been filtered out.

What does the AICPA say About Using the Five Available Audit Techniques?

The American Institute of Certified Public Accountants (AICPA) provides guidance for SOC examinations. Within the SOC guides (both a SOC 1 and SOC 2 guide are available) the AICPA provides some guidance on what methods of testing are acceptable.

Statement on Standards for Attestation Engagements (SSAE) No. 18 (Clarification and Recodification) is the standard governing SOC engagements (AT-C Section 320 for SOC 1 engagements and AT-C Sections 105 and 205 for SOC 2 engagements). Within AT-C Section 320 (Reporting on an Examination of Controls at a Service Organization Relevant to User Entities’ Internal Control Over Financial Reporting) the following is specifically stated about testing methods (bold italics were added to emphasize the key points):

Additionally, specifically within the SOC 1 guide put out by the AICPA, the below paragraph regarding testing is included (bold italics were added to emphasize the key points):

The methods of testing are listed in section IV of SOC reports where the independent service auditor includes their description of tests of controls and results. Some controls are tested by using only one method, while other controls may use multiple methods. The methods will be listed out in section IV along with the results of each of the tests.

At Linford & Company, we ensure that the audit testing procedures meet the type of controls to confirm design and operating effectiveness, in addition to complying with the guidance set forth by the AICPA.

Please contact us if you have additional questions about testing methods or if you are in need of compliance or advisory services for SOC 1, SOC 2, FedRAMP, HITRUST, and HIPAA audits and assessments. 2 thoughts on “Understanding Audit Procedures: A Guide to Audit Methods & Test of Controls”