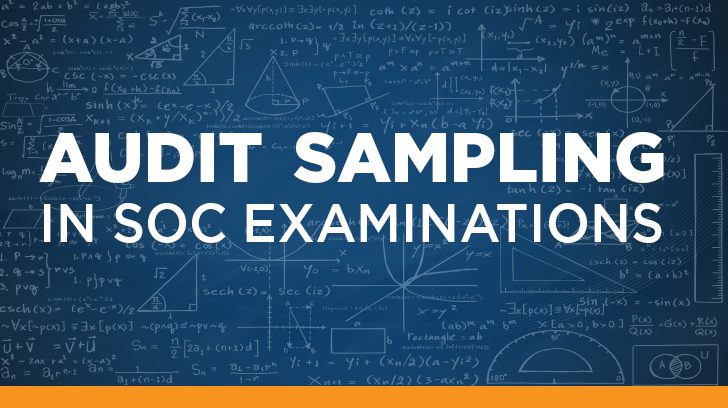 In completing SOC 1 and SOC 2 examinations (and most other types of audits), there is testing involved to determine the operating effectiveness of controls. There are different types of tests that can be applied to testing controls (for more information on the five types of tests refer to our article, Five Types of Testing Methods Used During Audit Procedures), and to complete a majority of these tests there is a sampling of populations that are required. In this post, we cover what audit sampling is and provide guidance on how to apply audit sampling to get to a confident conclusion on the operating effectiveness of controls.

According to the AICPA (in SAS No. 122 AU-C Section 530), audit sampling is defined as “The selection and evaluation of less than 100 percent of the population of audit relevance such that the auditor expects the items selected (the sample) to be representative of the population and, thus, likely to provide a reasonable basis for conclusions about the population.” The entire AICPA audit sampling guide can be referenced here.

Why do Auditors Use Sampling? What is the Purpose?

The definition from the AICPA is a little wordy, but to summarize, as auditors, the purpose of audit sampling is to allow us to do the right amount of testing to confidently determine the operating effectiveness of controls. This does not mean we can always test 100 percent, or even have the capacity to. Therefore, sampling comes into play in testing. But what is the right amount and how do you figure that out?

As auditors we need to consider three primary areas when performing audit sampling: 1) sample method, 2) the sample size, and 3) tolerable rate of deviation.

What are the Different Types of Audit Sampling Methods?

Every SOC examination should follow one or more of these sampling methods for testing of the population. A walkthrough or inquiry only would not be sufficient to test all controls.

What is the Appropriate Sample Size?

There are a number of factors that need to be considered when determining the sample size.

The tables below (Table 1 and Table 2) are what we use as guidelines when selecting our sample sizes in our SOC 1 and SOC 2 examinations. These tables align with the guidance set forth in the audit sampling guide from the AICPA.

Table 1 is used for larger sample sizes (250 or greater in the population) and shows recommended sample sizes to get to a minimum 90% confidence level. The table includes the sample sizes for up to two deviations and takes into consideration the risk of the control. 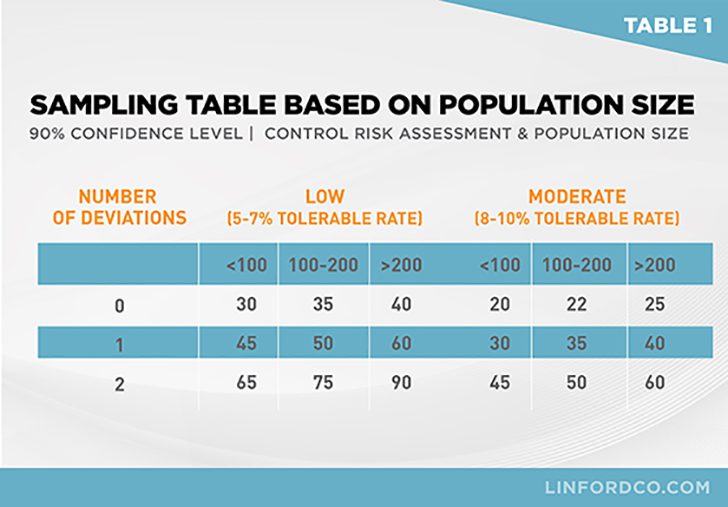 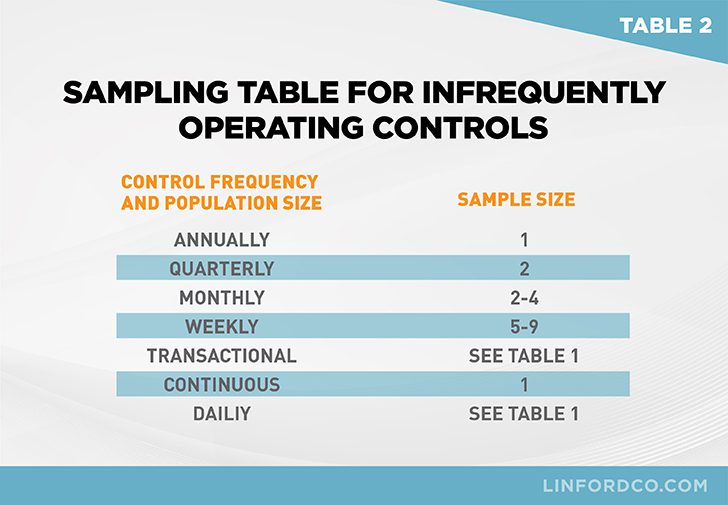 Using the tables above a few examples would include:

The guidance from the AICPA is pretty extensive around audit sampling. SOC auditors should review their sampling methods to make sure they are aligned with the AICPA guidance when performing their examinations. Please contact us if you would like further information on sampling, testing methods, or any of the services we provide.