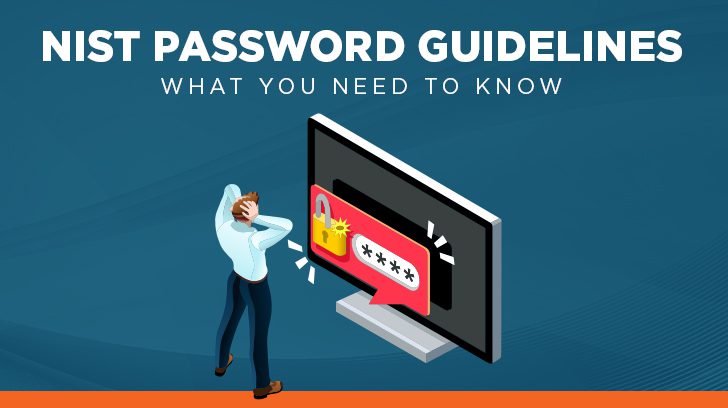 Passwords have always been a hot topic of discussion both in and out of security circles. Users have always hated being forced to come up with schemes to meet the complexity rules or change their password at defined intervals. The multitude of password requirements of the past have frustrated users and have led to bad behaviors which time after time led to compromised passwords and resultant data breaches.

The changes in direction for passwords as outlined in NIST 800-63-3 and are significant as they contradict the decades-old password requirements that drove everyone crazy, and they relieve users of much of the pain when dealing with passwords.

What Are NIST Guidelines?

The National Institute for Standards and Technology (NIST) is a governmental organization under the Department of Commerce. The NIST is essentially a scientific organization that focuses on measurement science, the development of scientific and other standards, and technology development. As part of their responsibilities, NIST creates guidelines and standards supporting the measurement and technology fields such as health and bioscience, advanced manufacturing, advanced communications, forensic science, and cybersecurity.

Under the Federal Information Security Management Act of 2014, NIST was charged with developing information security and privacy standards and guidelines. Their standards and technology publications in the cybersecurity realm are extensive. They include topics such as encryption, zero trust architectures, risk management, application container security, identification and authentication, etc.

One of the most well-known of their security publications is Special Publication (SP) 800-53, Security and Privacy Controls for Federal Information Systems and Organizations. It is at the heart of the various Risk Management Frameworks and is a comprehensive guide to security control definitions and supporting information.

Volumes A, B, and C get more into the details of managing digital identities. Volume A covers enrollment and identity proofing. Volume B covers authentication and lifecycle management, and Volume C covers federations and assertions. NIST 800-63 Volume B received a lot of attention in the security world because it broke with the norms of the previous decade’s (or more) guidelines/requirements for password management.

NIST did not recommend undoing everything we’ve known regarding passwords and leave it at that – that approach would be negligent. Some of the changes introduced in SP 800-63B are based on studies and research which indicated that the password requirements of the past encouraged the creation of bad passwords. See below for a summary of the NIST password guidelines:

The short answer is – it depends. It depends on which changes are made, how they are implemented within your organization, and the other compensating controls in place in your organization. Below are a few things to consider regarding each of the NIST password recommendations:

My concern about NIST’s password recommendations is primarily the minimum password length and dropping complexity. Regarding passwords, it is the overwhelming tendency for people to just go with what seems the easiest — the minimum 8 character password with no complexity. Yes, complexity has led to substitutions that haven’t added much to security. However, the use of complexity significantly increases the entropy in authenticators and, in my opinion, should still be used.

My recommendation is to use a passphrase in which the use of special characters (e.g. spaces and punctuation) is “normal.” Think of a passphrase over 15 characters (recommend longer for administrators) that is an easy sentence to remember. Then use the normal punctuation to add complexity. Consider the following examples:

The above passphrase uses complexity (capitalization, special characters, numbers, misspelled words not in a dictionary) in a way that is easy to remember and type. Passphrases such as the above are easy to remember, over 15 characters, and include complexity in a way that is natural. Since you aren’t changing your password every 90 days, you’ll get quite adept at typing it in. Then with the addition of non-SMS based MFA, you’ll add significantly more strength to your authentication process.

Until passwordless authentication options are prevalent, passwords will still be the weak link in the authentication process.  Improving passwords and authentication techniques is, as it has always been, a timely topic of discussion against the backdrop of the NIST password standards outlined in SP 800-63B. The NIST password standards represent significant departures from the federal password requirements of the past decades. To maintain a level of security with the NIST password policy guidelines the recommendations should not be considered a buffet where you only pick the things you like (e.g. minimum password of 8 characters and no complexity). Other elements such as checking for known bad passwords and throttling need to be implemented concurrently, especially with a minimum password policy of only 8 characters.

Overall, organizations should measure how the NIST password guidelines in SP 800-63B fit with their risk appetite and how they may be able to ease at least some of the burden for their users while still providing an acceptable level of protection. MFA should also be enabled for all authentication interfaces based on an organizational risk decision.

Linford & Company has extensive experience with NIST and associated NIST compliance. If you are interested in learning more about NIST requirements and compliance, please contact us. 3 thoughts on “NIST Password Guidelines – What You Need to Know”